As a criminal defense attorney in Mt Pleasant and Charleston, SC, we know that gun laws can be confusing. Violations of gun laws, even innocent ones, can lead to jail time, fines, and the loss of the weapon. Because these laws vary from state to state, when you travel between states, it is hard to know what is legal.

Recently, we represented a client who was traveling from another state to South Carolina who was stopped for a traffic violation. Although he had a concealed weapons permit (CWP) from another state, law enforcement confiscated his handgun because it was loaded and in a side-pocket of his automobile. We don’t want this to happen to you, so we wrote this article on the laws on handguns in South Carolina to hopefully assist South Carolina residents or people passing through this state in determining what they can and can’t do when carrying their firearms. There are numerous exceptions for law enforcement officers, military officials, reserve police officers, state constables, gun dealers, and various others. If you fall under any of the exceptions, then you probably already know everything in this article and then some.

This article is written for common citizens who have not been granted special privileges, but it also covers laws for concealed weapons permit (CWP) holders. In this article, we examine many issues such as where you can carry a concealed weapon, possessing a weapon at your business, transporting a weapon, selling a gun, finding a gun, and much more.

This FREE book for weapons owners has practical information on South Carolina’s gun laws, concealed weapons permits, the Protection of Persons and Property Act, use of deadly force, self-defense, defense of others, weapons offenses and penalties, and much more.

Do I need a permit to own a weapon in South Carolina?

Although this article examines concealed weapons permits, we’ve been asked whether a person needs a permit to OWN a handgun, a rifle, or a shotgun in South Carolina. The answer is no; no permit is required for ownership.

Where can a concealed weapon holder walk around with a gun in South Carolina?

The better answer is to explain where the CWP (Concealed Weapons Permit) holder CAN’T carry the gun. Everywhere else is ok, as long as it is CONCEALED. South Carolina isn’t an “open carry” state. If the gun is concealed, the CWP holder may carry the gun anywhere EXCEPT for the following places:

Any person may carry a concealable weapon from their automobile to a hotel room that person has rented.

If I DO have a concealed weapons permit, where can I carry a handgun in my vehicle?

CWP holders may secure a weapon under a seat in a vehicle, or in any open or closed storage compartment within the vehicle’s passenger compartment.

Does South Carolina have reciprocity with other states regarding CWP holders?

Reciprocity refers to an agreement between two states to recognize each other’s laws. South Carolina has reciprocity with certain states regarding concealed weapons permits. This means that if you hold a CWP in South Carolina, various other states will recognize it, but you still have to comply with that state’s laws when carrying it. The following is a chart showing reciprocity throughout the United States: 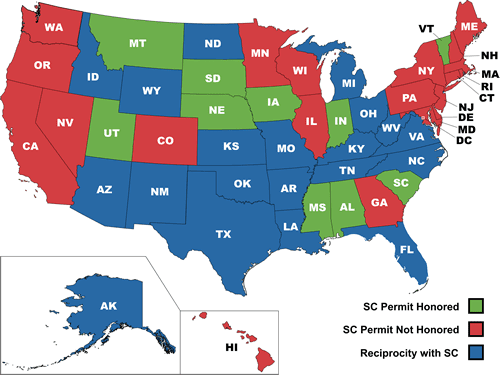 How do I keep concealed weapons out of my business?

You must post a sign that is clearly visible from the outside of the building. It must be at least 8 inches wide and at least 12 inches tall. It must state “NO CONCEALABLE WEAPONS ALLOWED” in black one-inch tall uppercase letters at the bottom of the sign and centered between the lateral edges of the sign. It must show a black silhouette of a handgun inside a circle seven inches in diameter with a diagonal line that runs from the lower left to the upper right at a forty-five-degree angle (think Ghostbusters). It must be placed between 40 and 60 inches from the bottom of the building’s entrance door. If the place does not have doors, then check with a lawyer to make sure the size and other requirements are met.

A person who brings a concealable weapon onto the premises or workplace that properly posts a “NO CONCEALABLE WEAPONS ALLOWED” sign may be charged with a violation of Section 16-11-620 (criminal trespass) for a first offense resulting in a $200 fine or 30 days in jail. Additionally, a second or a third offense may result in having the person’s permit revoked for a period of one year.

When am I prohibited from carrying a firearm in South Carolina?

If you’ve been convicted of a felony, a violent crime, a crime of criminal domestic violence, or are under a domestic order of protection (a/k/a restraining order in family court), then you may not possess a firearm or ammunition at any time.

If you’re a drug addict or user, an illegal alien, an alien under a non-immigrant visa, a dishonorably discharged veteran, or a fugitive from justice, then you may not possess a firearm or ammunition at any time.

If you aren’t a felon but are awaiting trial on felony charges, you may not receive a firearm.

If you are on probation or parole.

If a court has declared you mentally incompetent by a court of law.

If a court has ordered you to surrender your firearms.

[here] for an article on expungement laws in South Carolina.

If I DON’T have a concealed weapons permit, where can I carry a handgun in my vehicle?

You may carry a handgun in a vehicle is secured in a closed glove compartment, closed console, closed trunk, or in a closed container secured by an integral fastener and transported in the luggage compartment of the vehicle. The exception is that you can’t bring the gun to a school or college of any kind.

It is a little unclear what the South Carolina legislature meant when they used the term “integral fastener,” so to be safe, we suggest that any container used to transport a handgun be something that is lockable and that snaps or latches closed. A shoebox wouldn’t qualify.

If you’re riding a motorcycle, you must secure the handgun in a closed saddlebag or other similar closed accessory containers.

Under no circumstance can you carry the gun under the seat, in your pocket, or anywhere not specifically mentioned above.

Can I keep a handgun at my business in South Carolina?

If you are a business owner or the person in control of a business, you may carry a handgun at your business. If you are an employee, you may do so ONLY IF you have a concealed weapons permit AND you have the permission of the owner.

What if I am hunting in South Carolina?

May I bring a handgun into a friend’s house?

You may carry a handgun in your home or another person’s home ONLY IF you have the permission of the owner or the person in legal possession of the property.

How do I get a handgun from one legal place to another?

The handgun must be unloaded and in a secure wrapper and you must go directly from the building to your car or from your car to the building.

Can I sell my handgun in South Carolina?

You may not sell, offer to sell, deliver, lease, rent, barter, exchange, or transport for sale into this State any handgun to people convicted of violent crimes, fugitives from justice, habitual drunkards, drug addicts, or people who have been adjudicated incompetent, a person who is a member of a subversive organization, people under the age of eighteen (with certain exceptions including members of the Armed Forces or R.O.T.C.), people who by order of a circuit judge or county court judge has been adjudged unfit to carry or possess a firearm, and illegal aliens. Likewise, it is illegal for the above-described people to carry or possess a handgun.

Finally, if the original serial number has been removed or obliterated, you cannot buy, sell, own, or carry the handgun, and you should probably contact a criminal lawyer to decide how to dispose of it.

If you are the seller of a handgun, it is recommended that you retain a lawyer to draft a Bill of Sale so that the transfer is documented. This way, if the gun is later used in a crime, you can show that the gun legally left your possession and went to someone else.

What should I do if I find a handgun?

Call the police and turn it over to them. They will then try to determine whether the gun is stolen or if it was used in the commission of a crime, and they may be able to locate the rightful owner. They are required to publish the existence of the gun in the newspaper. If the gun is cleared and the owner does not turn up, then you may be able to keep the gun after 90 days go by if you pass an application check and pay the advertising costs, such as the cost of running the ad in the newspaper.

What are other weapons offenses in South Carolina?

There are many weapons laws in South Carolina, and if you have any specific questions, you should consult with an attorney. However, some offenses are more commonly seen than others. You can’t own or handle an automatic weapon, sawed-off rifle, or sawed-off shotgun. You can’t bring to a school any weapon, which includes a knife with over a 2-inch blade, a blackjack, a metal pipe or pole, firearms, or any other type of weapon, device, or object which may be used to inflict bodily injury or death. The exception is that a concealed weapons permit holder may carry the weapon inside an attended or locked motor vehicle and is secured in a closed glove compartment, closed console, closed trunk, or in a closed container secured by an integral fastener and transported in the luggage compartment of the vehicle.

City and county ordinances may regulate the careless or negligent discharge or brandishing (displaying) of firearms. Check your local laws before handling or discharging firearms.

Numerous citizens own guns and use them for self-defense, target shooting, hunting, and other lawful purposes. If you’re a gun owner or thinking about purchasing a gun, you should familiarize yourself with the laws on guns so that you don’t get caught accidentally violating a law. Concealed weapons permit classes to provide good education on both gun laws and gun safety, so consider taking one. Accidental discharges are all too common and can result in death, terrible injury, and criminal prosecution. The number one and two rules when handling guns are (1) always pretend they are loaded, even if you are sure in your mind they aren’t, and (2) never point the gun at someone even if you believe it isn’t loaded.

This article is written as a summary on the gun laws in South Carolina, and it does not address every applicable law. If you have any specific questions regarding guns, are considering selling a gun, or are charged with a crime concerning a gun, call the criminal attorneys at Futeral & Nelson to discuss your rights and options.

Is Pot Legal in South Carolina?

What Should I Do if There’s an Arrest Warrant for Me in South Carolina?

What is Possession, Distribution & Trafficking Cocaine in South Carolina?

What is the Crime of Arson in South Carolina?

What is the Crime of Burglary in South Carolina?

What is Criminal Domestic Violence in South Carolina?