If you’ve made bad choices, then make a good one by calling our firm today.

Our DUI defense lawyers have exactly what you need – the drive to win.

Our goal is to get the best possible result for your assault case – your freedom.

Looking for a Criminal Lawyer in Charleston? Your Best Legal Defense is Our Business.

Sometimes bad things just happen like when you get pulled over for DUI. Other times, good people just make bad choices like when a college student gets arrested for disorderly conduct or your teenager gets caught with marijuana at a party. No matter what the circumstances may be, you can meet with our Charleston criminal lawyer Stephan Futeral or criminal defense attorney Thomas Nelson for FREE.

We strive to be the best at what we do. That’s why we’re top-rated (AV) by Martindale-Hubbell, Stephan Futeral is rated 10 (Superb) by AVVO. Thomas Nelson is one of Super Lawyers Rising Stars. Stephan and Thomas are both members of the National Trial Lawyers Top 100 Criminal Trial Lawyers. This is an invitation-only organization composed of the premier trial lawyers from each state in the nation who meet stringent qualifications as criminal defense trial lawyers. Also, our clients endorse us with 5 stars ★★★★★ on Google Reviews.

We strive to be the best at what we do. That’s why we’re top-rated (AV) by Martindale-Hubbell, Stephan Futeral is rated 10 (Superb) by AVVO. Thomas Nelson is one of Super Lawyers Rising Stars. Stephan and Thomas are both members of the National Trial Lawyers Top 100 Criminal Trial Lawyers. This is an invitation-only organization composed of the premier trial lawyers from each state in the nation who meet stringent qualifications as criminal defense trial lawyers. Also, our clients endorse us with 5 stars ★★★★★ on Google Reviews.

As criminal defense lawyers & criminal attorneys in Charleston, we’ve prepared this overview of what to do in the unfortunate event that you are arrested in South Carolina and to answer some of the common questions clients ask us:

What Should I Do if I am Arrested in South Carolina?

Don’t argue with the police. You can’t talk your way out of being investigated, arrested or prosecuted. Don’t try. Cooperate, but don’t incriminate yourself!  YOU MAY REFUSE TO ANSWER ANY QUESTION IF THE ANSWER WOULD TEND TO INCRIMINATE YOU. Pay attention to what happens when you first encounter the police and afterwards. Try to memorize who was there to see and hear what happened.
GET HELP NOW

What are My Rights if I am Arrested in South Carolina?

You also have the following rights:

What Happens if the Police Didn’t Read Me My Rights?

Many people incorrectly believe that law enforcement doesn’t read you your “Miranda” rights (such as the right to remain silent), the charges will be dismissed. In South Carolina and elsewhere, the police only have to give you a Miranda warning AFTER you are arrested but BEFORE you are questioned. If the police fail to give you your Miranda rights, then your statements can’t be used against you in court, but the charges won’t be dismissed.

What Happens After I’m Arrested in South Carolina?

Bond Court – After you are arrested, fingerprinted, and jailed, you’ll appear before a magistrate judge in bond court. In Charleston, this is done by video conference. You have a right to an attorney during your bond hearing. In setting a bond amount, the judge will decide whether you’re a risk of flight or a risk of harm to the community. Unless the court releases you on your own “personal recognizance,” you’ll have to post bail to get out of jail.

Bail is financial assurance that you will return to court after you’ve been released from custody. There are two ways to post bail. First, cash (or property) may be posted with the clerk of court. If you don’t have the cash, you can hire a bail bondsman to post bail. A bondsman charges a fee which isn’t refunded at the end of your case. If you post bail yourself and you are found not guilty or the charge is dismissed, then you’ll get your money back. If you are found guilty, then your money is returned to you after you are sentenced.

Discovery – To plan your defense, you need to know what information the prosecution intends to use against you. In South Carolina, you have the right to ask the prosecution to disclose this information through discovery made by way of formal, written motions. First and foremost, you are entitled to the disclosure of any evidence that tends to clear you of guilt (exculpatory evidence). Additionally, you are entitled to information such as witness statements, photographs and documents, results from experiments or tests, and other information.

Trial – In Charleston and surrounding areas, most cases take several months to a year to be set for trial. You can choose either a bench trial (a judge hears and decides your case) or a jury trial consisting of 12 jurors in felony cases in General Sessions Court or 6 jurors in misdemeanor cases magistrate’s court. During trial, the prosecution goes first and the defense follows last. Because you are “innocent until proven guilty,” the prosecution must prove that you’re guilty beyond a reasonable doubt. That means that you aren’t required to put up any evidence or testimony to show that you’re innocent.

When the lawyer’s arguments, the witnesses, and closing statements by the attorneys are done, the jury renders a verdict. If you’re acquitted, the case is over and you free to go. If the jury decides you’re guilty, then the judge must decide your punishment such as fines, probation, and/or time in jail.

Is Marijuana Legal in South Carolina?

END_OF_DOCUMENT_TOKEN_TO_BE_REPLACED

At Futeral and Nelson, our criminal defense attorneys have used private investigators for a number of reasons over the years, including gathering...

END_OF_DOCUMENT_TOKEN_TO_BE_REPLACED

The criminal defense lawyers at Futeral & Nelson handle cases for people with special needs, intellectual disabilities, and mental illness. Some...

END_OF_DOCUMENT_TOKEN_TO_BE_REPLACED

What Should I Do if There’s an Arrest Warrant for Me in South Carolina?

As a criminal defense attorney in Mt Pleasant and Charleston, South Carolina, we've helped clients who had an outstanding warrant for their arrest...

END_OF_DOCUMENT_TOKEN_TO_BE_REPLACED

What is Possession, Distribution & Trafficking Cocaine in South Carolina?

END_OF_DOCUMENT_TOKEN_TO_BE_REPLACED

What is the Crime of Arson in South Carolina?

Get Our Free Book on DUI Defense in South Carolina

Based on over 50 years of their combined experience defending DUI’s in Charleston and elsewhere in South Carolina, Stephan Futeral and Thomas Nelson wrote this free ebook – DUI in South Carolina – Piecing It All Together. In the book, Stephan and Thomas help you understand more about the laws and defense against DUI and to explain your rights in easy-to-understand terms.

In this informative and insightful guide for drivers, you’ll find information covering DUI and Driving with an Unlawful Alcohol Concentration (DUAC) law; your rights before, during, and after arrest; administrative implied consent hearings; license suspension; field sobriety tests; the DMT DataMaster breath test machine; blood tests; penalties & costs for a DUI; preparing for court; how to be an effective witness; and much more. If you are charged with a DUI, then this book is a “must-read.” 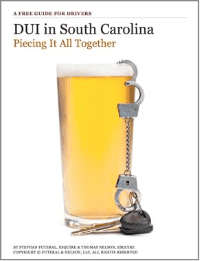