How An Attorney Can Navigate Your DUI

While no DUI violation is straightforward, some DUIs are inherently more complex than others. That’s because if you are charged with a felony DUI, you have a lot more at stake. Even with simpler DUIs, numerous factors are at play. An experienced DUI lawyer can help you navigate your DUI case when emotions are generally high. Especially in the case of a felony DUI involving death, a knowledgeable lawyer may be imperative. That said, even less tragic cases can still benefit from a consultation with an attorney with your interests at heart. While costs are always a concern with any legal consultation, DUI cases might warrant spending more on a qualified attorney. Also, a DUI lawyer is often able to offer a free consultation before committing to your case. Here are several ways a lawyer can make a difference in helping you assess and approach your DUI case.

Legal Opinions Matter in DUI Cases — Get One First

Criminal court cases are often more complicated than civil cases, as they revolve around whether or not someone is fundamentally guilty of committing the crime they are charged with. These types of cases are brought to courts by law enforcement, and, as such, generally, have witnesses or evidence in order to back up the charges. As a result, it’s best to find someone else to represent you in such cases, or at least consult with you to determine your best course of action. This is because criminal cases typically go beyond the knowledge that someone could reasonably be expected to have to best represent themselves in their case. Thankfully, in a DUI case, someone familiar with the complicated and constantly changing rules and laws surrounding DUIs can offer you their own assessment of the case. This can be a major benefit for clients who have questions about their charges or who are determining whether or not it’s best to plead guilty or innocent. By sharing details of your DUI — such as your police report — with an experienced attorney, you can gain invaluable insight into the complex, high-stakes world of DUI law.

Another benefit of consulting with a DUI lawyer comes into play when you’re planning on taking or considering a plea bargain. As trials are expensive to carry out, many times first offenders will have the option of accepting a standard defense, but they may wish to negotiate a plea bargain instead. A plea bargain typically involves pleading guilty for a charge that is considered lesser than the crime you were charged for. In the world of DUI law, plea bargains can sometimes result in reckless driving charges instead of the heavier charge of driving under the influence. Plea bargains can best be navigated by someone who knows the court system, as they may already have existing relationships with the prosecution and can often negotiate far better than your average offender. In fact, according to some research from Lawyers.com, 22 percent of those who hired a private lawyer were able to receive a plea bargain, as opposed to the 7 percent of defendants who used a public defender and 0 percent of defendants attempting to represent themselves.

DUI Lawyers Help You Stay On Top of Your Case

One of the biggest benefits of talking about your DUI case with a DUI lawyer is the wisdom they bring to the table. A DUI attorney is well-versed in how cases typically go, as well as what evidence is most useful and the general flow of events inside and outside the courtroom. A lawyer who specializes in DUI cases can help you stay on top of important deadlines in your case involving evidence, and the filing of other motions. It can be hard enough to maintain a calm demeanor in the face of your court hearing, much less to stay organized and strategic in how you approach your defense. Consulting with and retaining a DUI lawyer may make all the difference. DUI defenses can be tricky, and you shouldn’t navigate them alone. With help from an experienced legal team, you can get a defense that helps you put your best foot forward. Rather than turning to a public defender or representing yourself in your case, consider turning to an experienced, private lawyer to handle your DUI charges. From offering their opinion on the strength of your case to negotiating plea deals and ensuring the case runs on schedule, a private attorney can offer a host of benefits to first-time offenders and those with repeat charges. If you need legal representation in a DUI case, Futeral & Nelson could help you keep your license and return to the road in no time. Reach out to us today for a case evaluation, free of charge, and see if we’re a good fit for you. 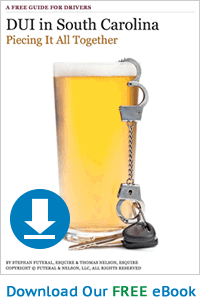 What Happens if I Get a DUI on Federal Property in South Carolina?

Does a DUI Suspend Your Driver’s License in South Carolina?

The Law of License & DUI Checkpoints in South Carolina

A Detailed Look at Felony DUI in South Carolina